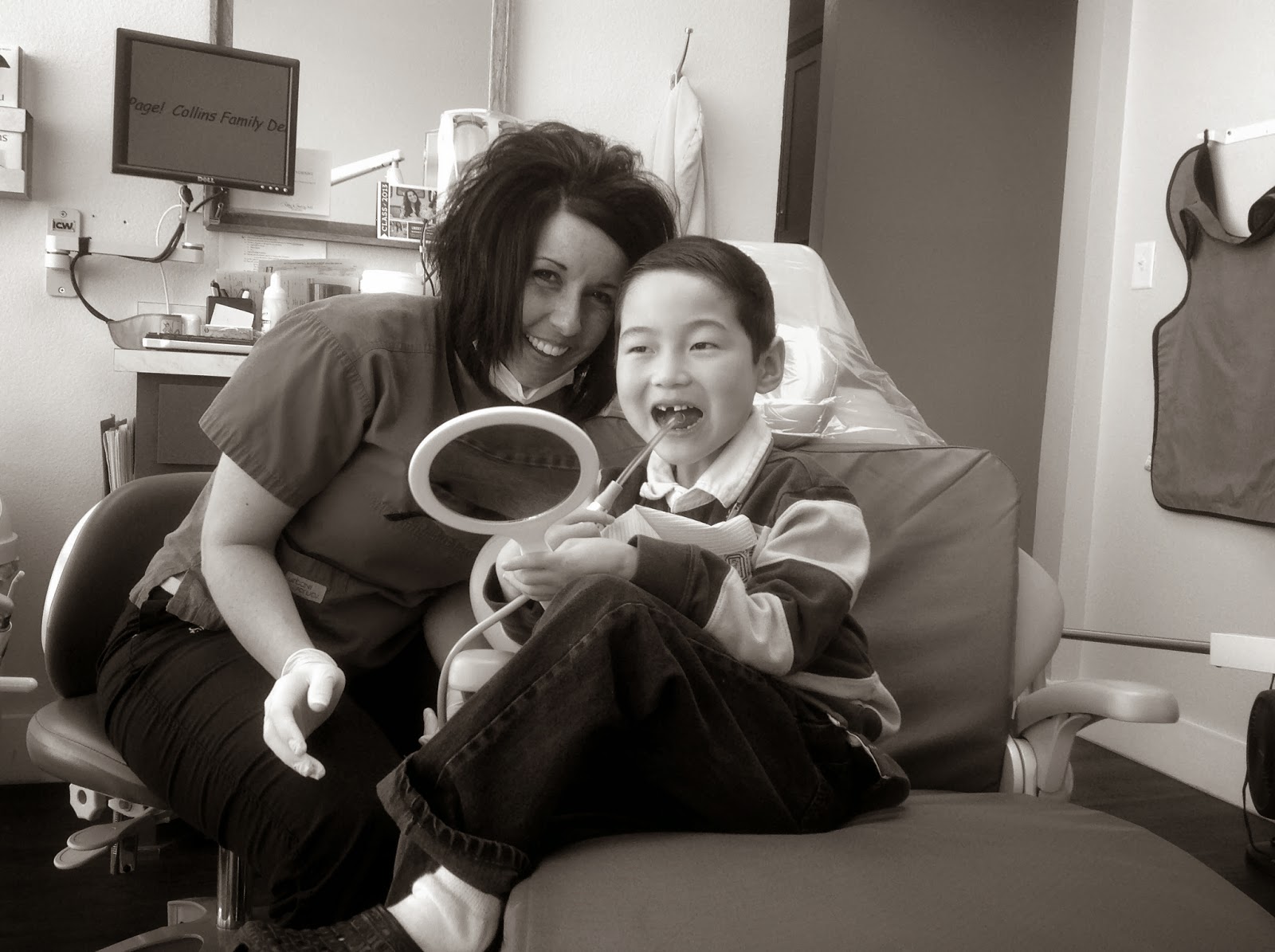 Sure our Creator knows the number of hairs on our head, and of course, he knows the number of teeth in our jaws, yet sometimes I still forget what that means.   It means He loves us dearly and nothing is random or unplanned.   Unbeknownst to us earth dwellers, the dentist office set Teddy up with the perfect hygienist.  God knew.  As I told her that Teddy has some difficulty brushing his teeth due to his arm and hand issues, she told me that she has cerebral palsy and she could understand his weak hands perfectly, because she has one weak hand herself. She was quite partial to Teddy and let him help hold the suction and the mirror.  He rode up in down in the chair several times and was all smiles when he was finished.  While his teeth were cleaned, it was really my heart that got the scrub down, because I realized God cares even about the dental details. 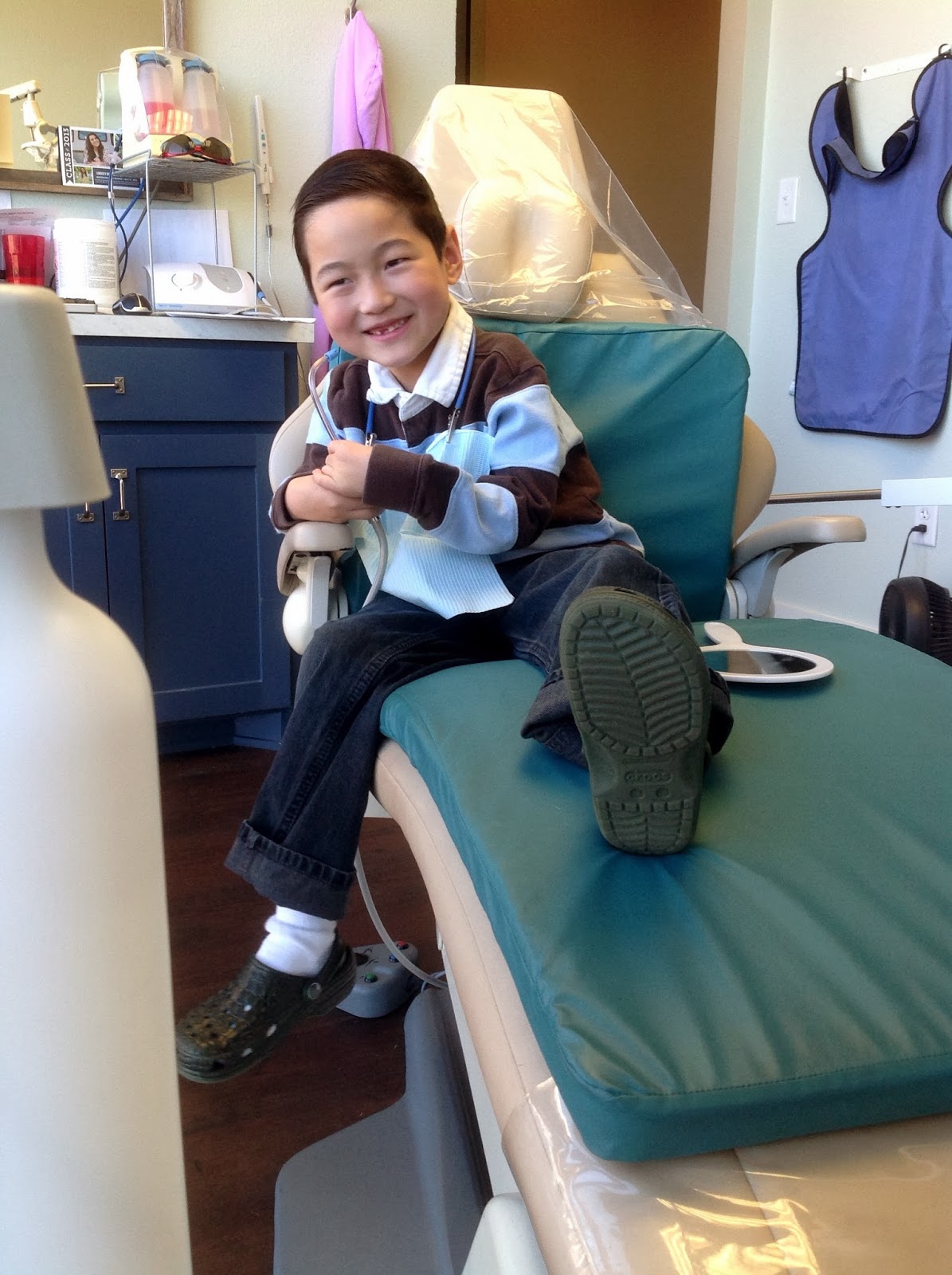 When Jane saw these photos, she said Teddy looks happy and that Emily and her were praying for his cooperative spirit while we were away.  My heart sings to the Lord.  "Let not your heart be troubled."  God has got it all under control.

This post has been digested and regurgitated every time I hear some well-meaning person say, "You need to take a spiritual gift inventory and see where you are gifted so you can serve in that capacity."

Well, I may step on some toes here.  But when did being gifted in an area mean that is where God wants you?  In fact, Scripture is full of examples where people pleaded with God that they did not have the qualifications.

Look at Moses claim he was a man, slow of speech and faltering tongue.  Yet God chose him, and not his brother, to speak before the king of Egypt.

Look at cautious Gideon, toppling an idol under cover of night, because he is fearful of the men of his own town.  Yet God chose him to lead the unprepared men, those who lapped water like a dog, into battle with the Midianites.

Look at Jonah, Mr. I Don't Want To Go; I hate those Ninevites.  Yet God chose him to speak what he found distasteful, and the Ninevites repented.

Look at Esther, a Jewish orphan, a woman of self-doubts.  Yet God chose her to boldly rescue a nation.

Look at Paul, a former persecutor of Christians.  Yet God chose him to gently lead the flock.

I believe that if these people had taken a spiritual gift inventory, they would have ranked low in what they were called to do.  They didn't follow human wisdom and match their gifts to a cause.  God matched them where they weren't comfortable or competent.  God predetermined where they were to serve, and he chose places where they had to rely on Him and not their giftedness.

In my life, a spiritual gift inventory may give me a clue where I will serve, but it never seems to be in the likely areas.  No, it is where I am weakest, Jesus often leads me.  He delights in using the lowly, humble, broken, foolish, weak and young to stupefy the wise world.  Don't you know that He still turns tables in the temple and runs out money-making schemes and invites in the poor of spirit?   Humanly, we can't understand His wild outbursts, His management of people and resources.  Jesus loves to clear out our old thinking, and surprise us with the sufficiency of Himself. 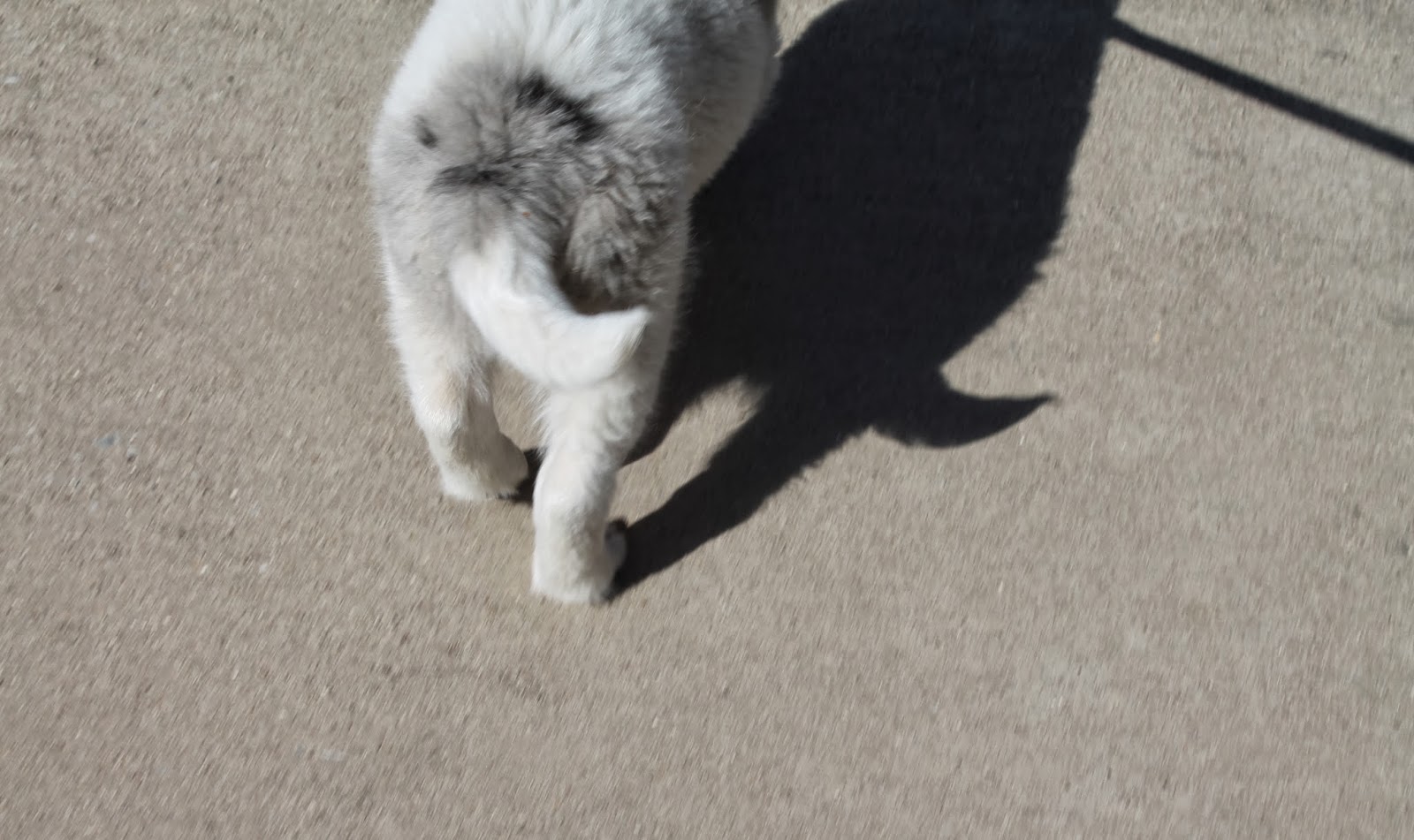 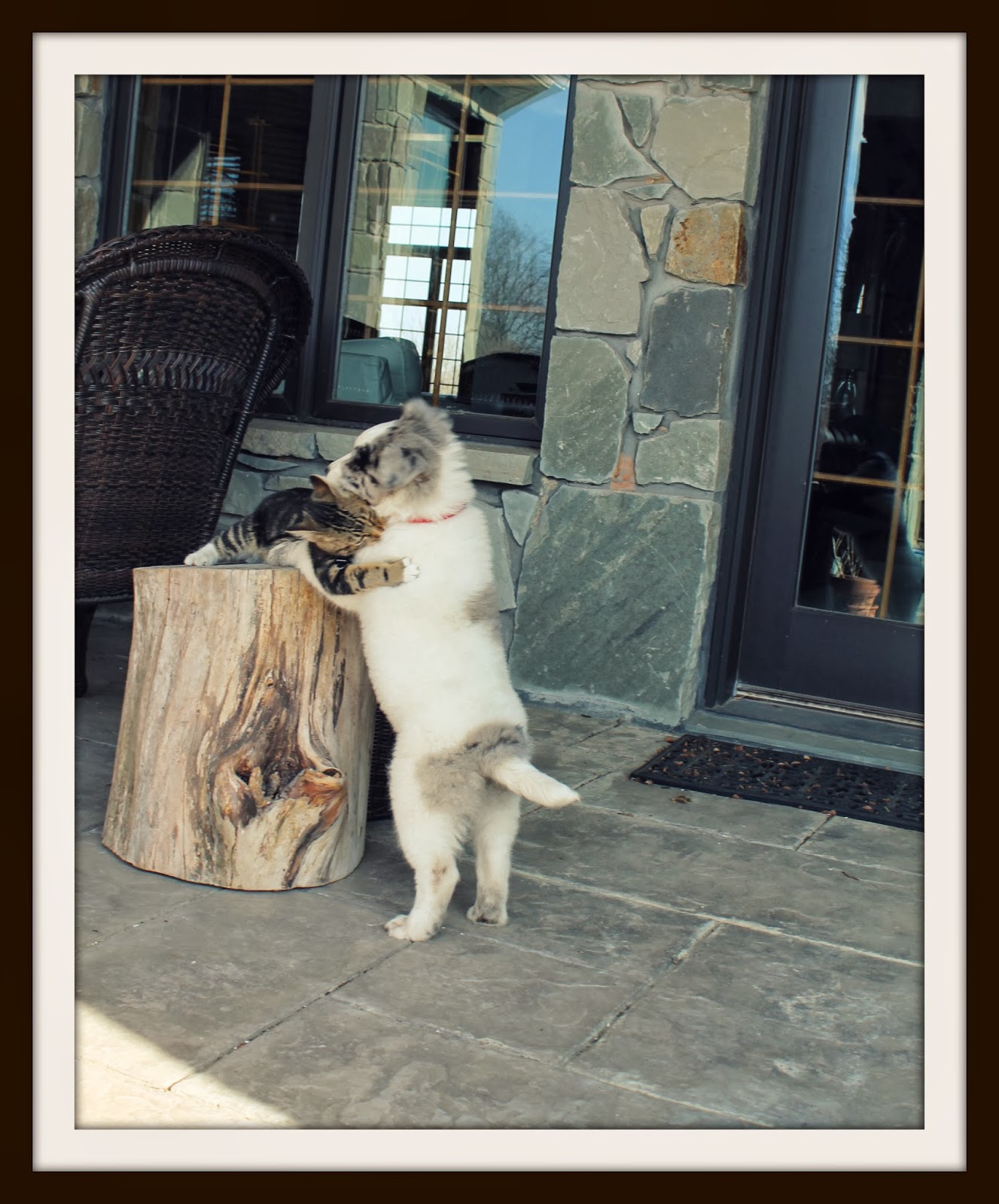 Sometimes a cat needs to cry on a dog's shoulder
Posted by Anna at 7:12 PM No comments:

If I left you with the last post you might think wrongly that the sweet Teddy has got the better of us.

I see God working in all of us to love where our natural inclination might be to withdraw.  When Teddy seems to relish his role of in-house pest, he needs more attention not less.  He is a precious little boy that never had a family and consequently doesn't yet have the social and self awareness of how his actions effect those around him. Living a life of Grace is about choosing to hold on when someone pushes you away.  Living out the Gospel demands that we live immersed in the Holy Spirit. The Spirit is the giver of kindness, patience, faith and love which must rain on us every day as we are dry of ability.  And I know the Triune God well enough, to know his mercies are new every morning and he always sends the showers.

The work of the Lord can best be seen when our inward calmness ensues in the face of emotional turbulence.  Emotions, uncontrolled and raging, are like eating scorching hot food that burns the feeling out of your tongue.  Then, you don't mind being burnt again, because the damage has already been done.  It is a horrid cyclical life to be left unrestrained.  I lived there once.  It is worse yet to know the evilness of one's heart and to feel one doesn't deserve forgiveness, because of guilt and shame.  It is absolutely fatal to stay there in the corner, all alone, angry, and unrestored.  God not only runs to the prodigal son to meet him, but he seeks out the older brother sulking outside, questioning the goodness of his father.  The Bible is most definitely alive and we get to live in a crazy real parable.  We get to model what we have seen our Heavenly Father do with us and we get to wrap our physical arms around a spiritual issue and a precious son.

Is it no surprise that the more we put aside our human efforts, dry and futile, and live drenched in Christ that our love for our son grows.

During a great Bible study lesson this week, I heard the leader warn, "Conduct cancels creed."  I think I see the application in this post.  What you believe, you have to live out.   When you jump into a parable and let your actions and attitudes be interwoven with what Scripture says, you see the Bible as living and active all over again.  God is amazing.
Posted by Anna at 6:00 AM No comments:

"I came to bother you" 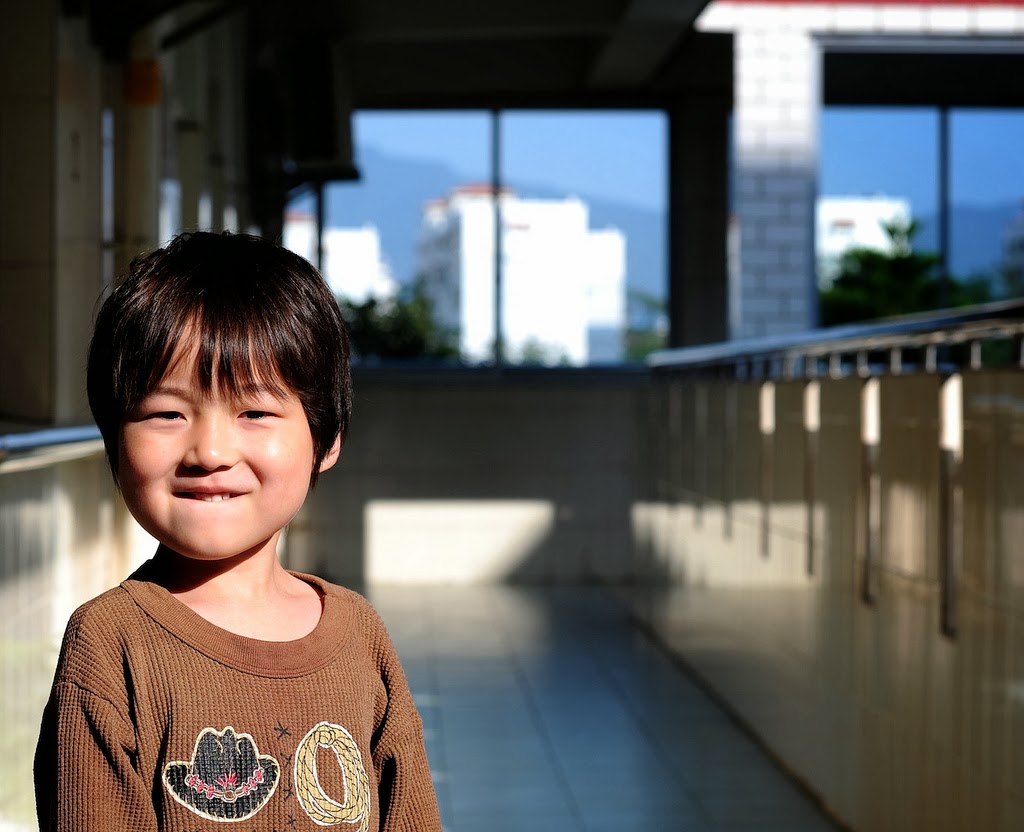 This week we received photos in the mail of Teddy while living in Guilin where he had his casting and surgery.   Absolutely love his hair.  I think it is God's sense of humor that Teddy would be wearing a shirt with a cowboy hat and a lasso.  From day one,  Ben has wanted to call him Tex, because of his new initials TX.

My littlest cowboy also came with some stories. This is from a newsletter in November of 2012.


He appeared at the door of
the Office one day while
Connie was drawing up a
Whiteboard. She asked him
what he was doing. He
replied "I came to bother
you"!
What can I add, but from the mouth of babes comes wisdom.  So funny.
Posted by Anna at 10:16 AM No comments:

The Monogram of Belonging 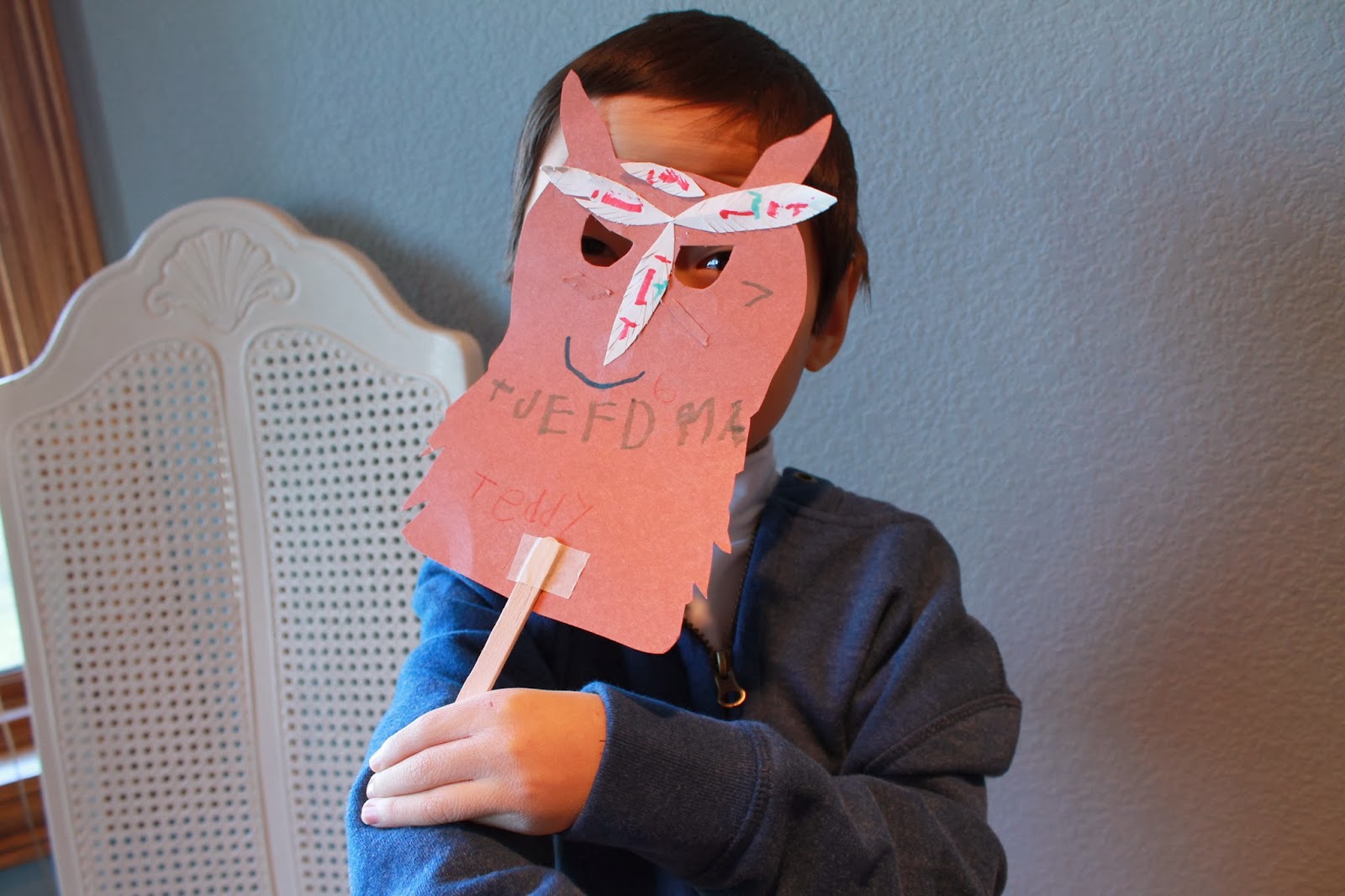 Super sweet.  Teddy tends to decorate all his papers with TJEFDMA.
The initials of his family members.  He belongs to someone.  He knows it.
Posted by Anna at 3:08 PM No comments:

I think for so long I told myself what more could I do.  I already had a houseful of children and a busy husband.  I already felt satisfied in the balance.  I wasn't really yearning for change.

Then I met Jesus anew.  And the Living Word spoke into my life and said to fill my water pitcher to the brim. 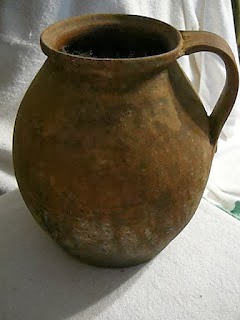 For some strange reason, I didn't ask, "Must I?"

Another servant of Jesus heard the same call.  Fill your earthen jug to the brim.  And that special servant who serves beside me, initiated obedience to the voice of Jesus.   When two servants go fetch the water, how much better than one alone?

Water fetching is difficult work.  I know this from my brother's personal accounts of the women and children in South Sudan who walk half a day to get drinkable water.  Balancing big containers of water on their heads is not only an art form, it is their only means of survival.  When water sloshes over the sides, that is one less life-giving sip for their family at home.

Knowing this I think I understood that water, so precious, is hard to obtain.   Adoption is like fetching water.  It is heavy, sweaty, tiring work.  We were more surprised than anybody that we willingly subjected ourselves to things we found wearisome like: physical exams, notaries, fees, financial statements, inspections, social workers, fingerprinting, paperwork and loss of privacy.   Jesus' voice does that; it made us foolish in the world's eyes.  We questioned our sanity too.

Several times we had almost filled our jug to the brim.

I am writing more for my benefit than yours.  As you know, the almost turned into actuality.  We did travel the globe to fill our jug, we think it is pretty brimming.   I guess you might say we are now waiting for the return to Cana.  At Cana, Jesus instructed the servants to fill their jugs with water and then Jesus transformed the obedience into wine.   I have high expectations from Scripture that what Jesus initiates will always taste best in the end.   Therefore, bottoms up.   A toast is in order to the Winemaker.

When the Sun Smiles 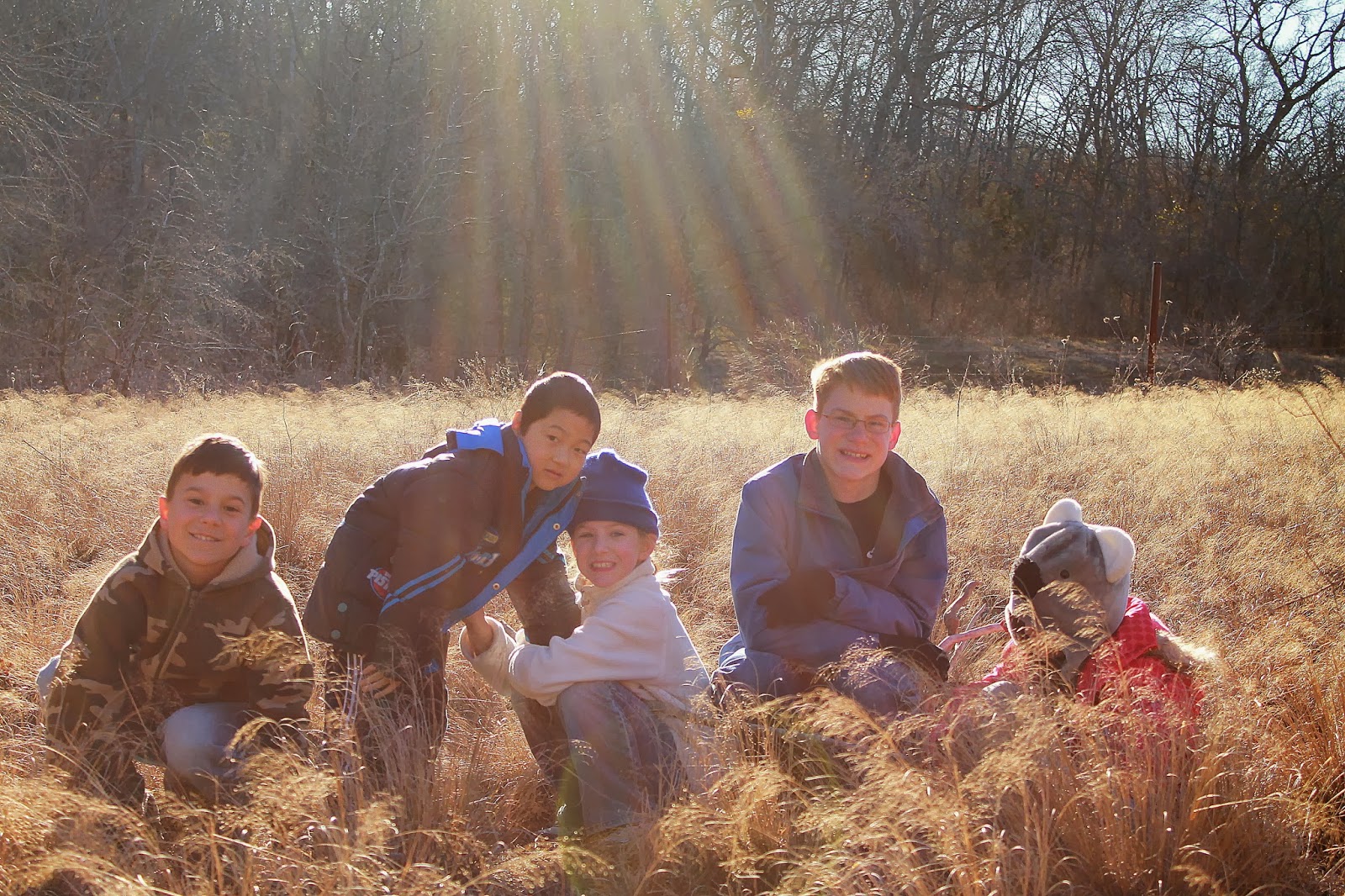 What's New at Our House 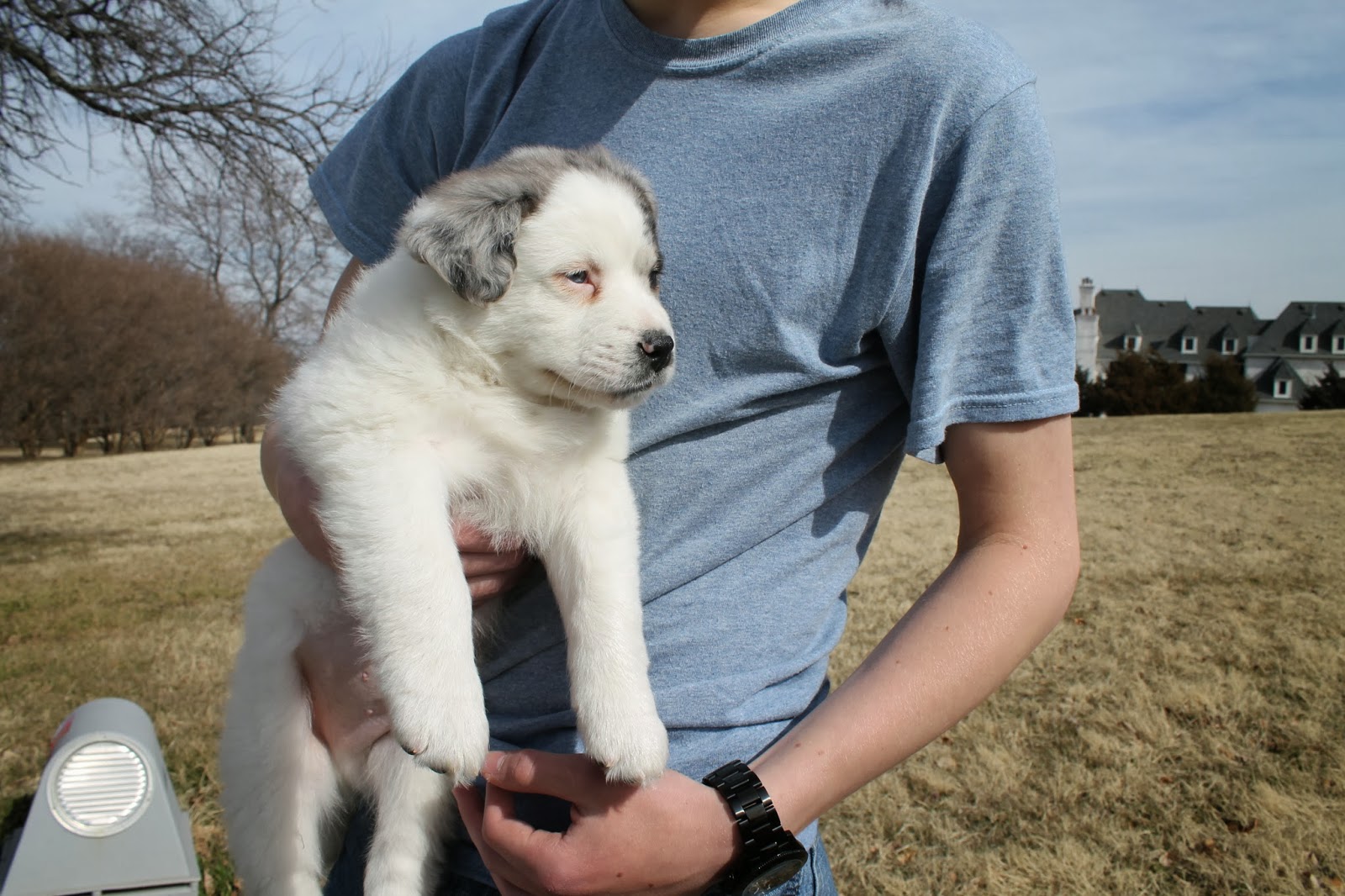 We brought home a puppy which Teddy helped choose. And if that wasn't enough, we also brought home a kitty.  The cat is Emily's longing fulfilled.  We named the cat I.Q. 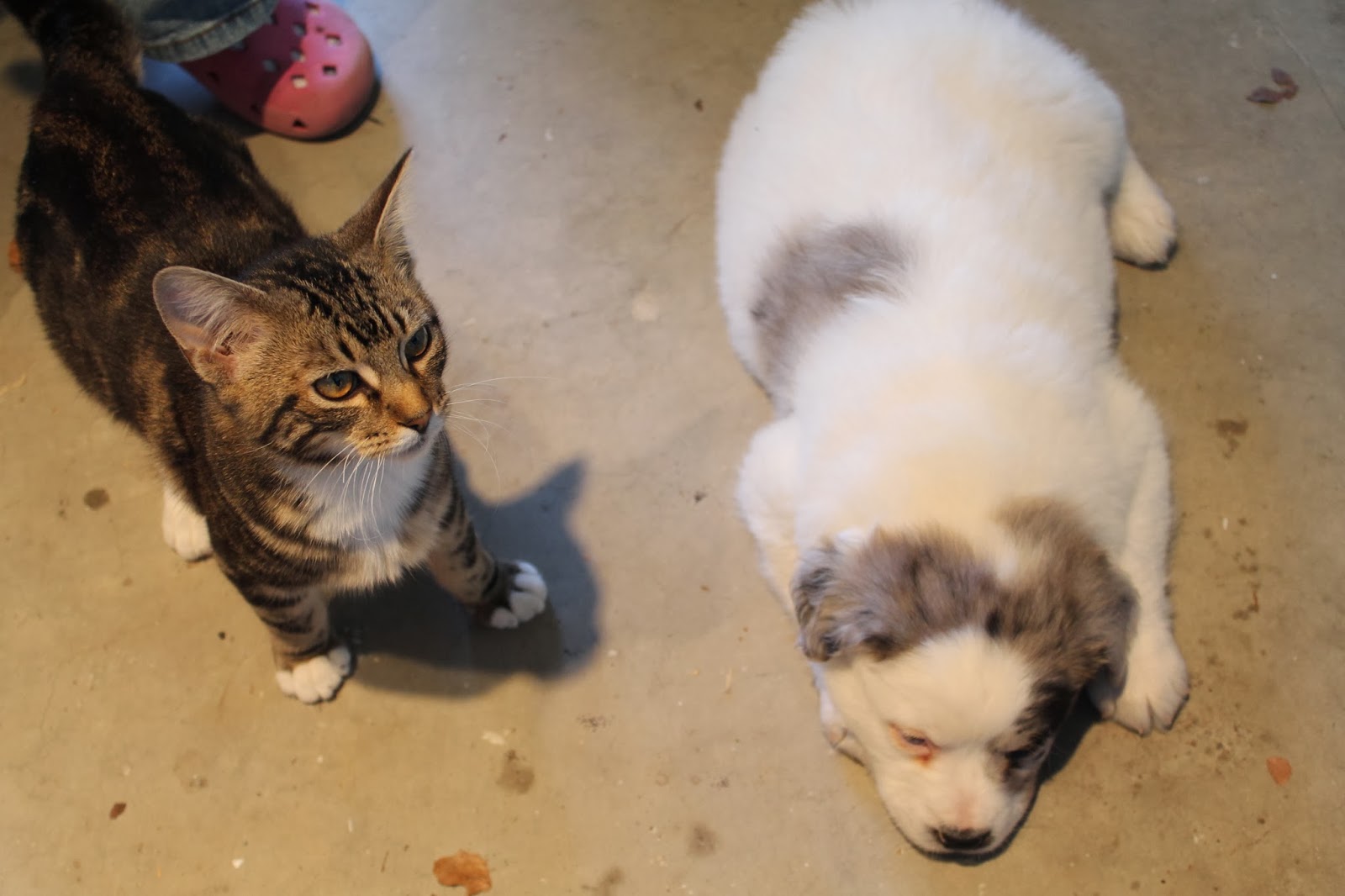 The puppy is sad because he hasn't been named yet. 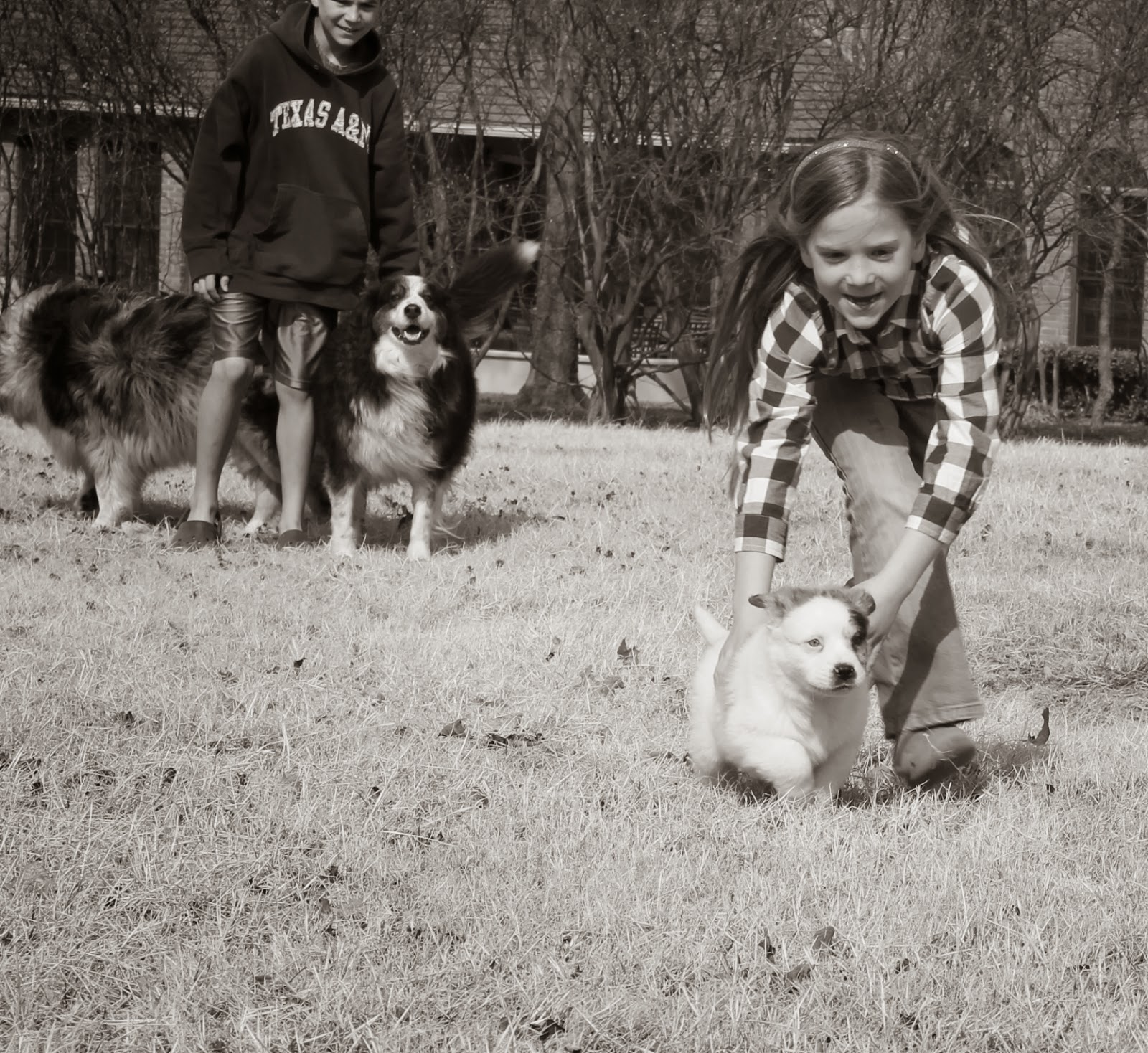 Jane with our puppy