Alex asked me what Ben use to do for a profession before he was married. It is really quite a difficult question as he was an entrepreneur and used his talents in many crazy jobs, but I responded he worked in the oil field. Alex then said, "I thought he worked in the greeting card business." That was news to me. Imagining Ben with a chewed-up pencil in the corner of his mouth contemplating sentimental nonsense that ryhmes with roses, made me laugh.


P.S. If you come across one of his highly-classified greeting cards, I'll pay for postage.
Posted by Anna at 5:37 PM 1 comment: 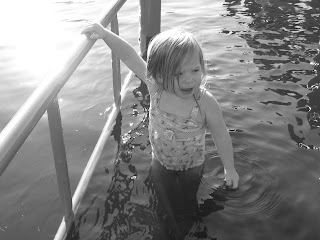 The deepest part I discovered was eight inches above my knee. The water was cold and Jane was hesitant. 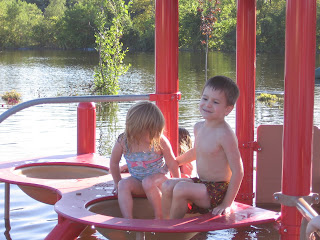 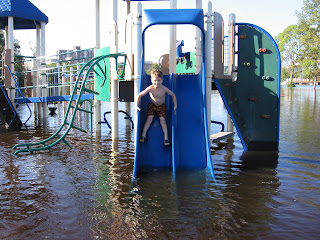 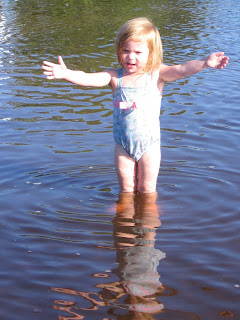 The water in the adjoining parking lot was quite shallow and as warm as bath water. 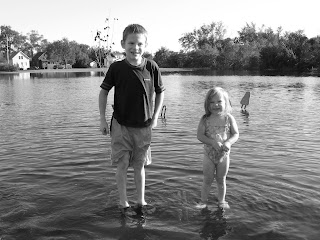 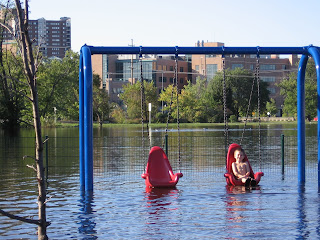 Due to the eleven inches of rain and a creek overspilling its banks, Bronson Hospital (in the background) now boasts private rooms with lake view. This use to be a large grass field. 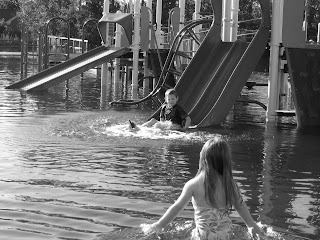 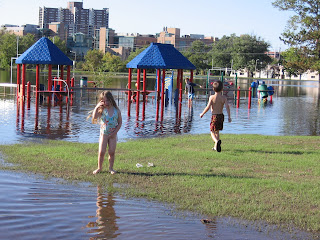 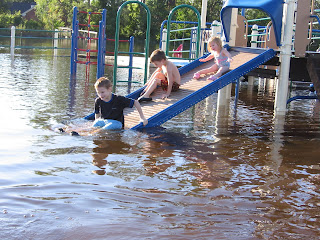 We live five minutes from the hospital, but with the flooded roads it took Ben 45 minutes to get to work. 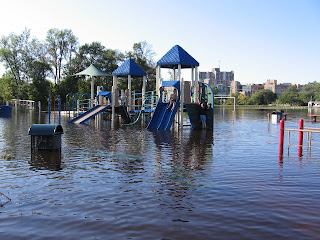 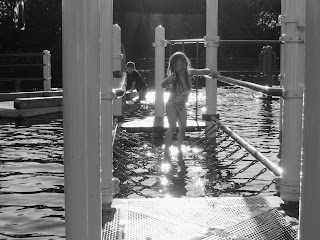 Well, a nice policeman thought I was crazy to let my kids wade and play in "stagnant" water, but the water was irresistible even to this grown-up. And it was doctor approved. Frankly, I was only to pleased to get their bathing suits and fritter away an afternoon at the park. We had so much fun that I took them twice within a few days. 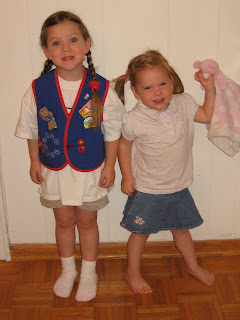 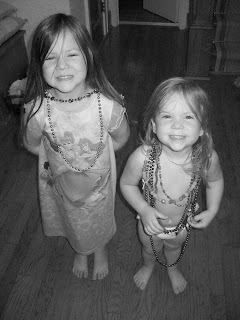 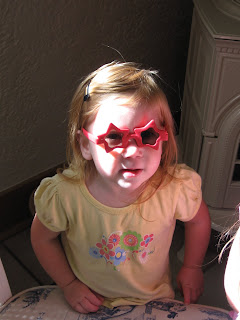 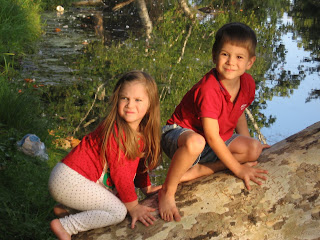 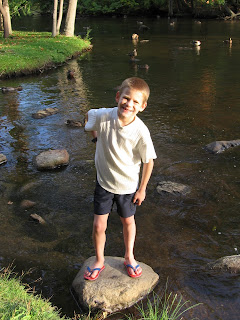 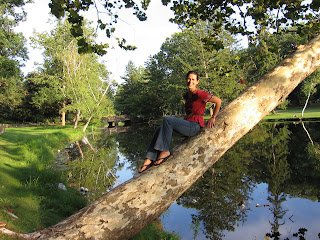 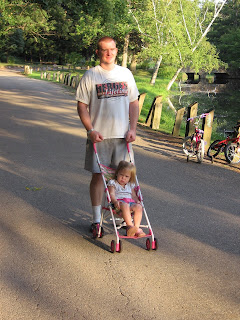 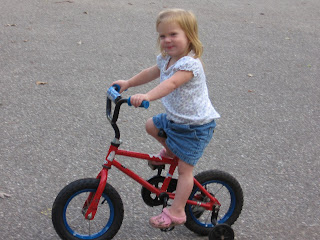 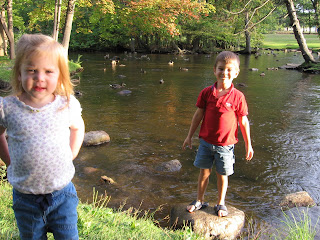 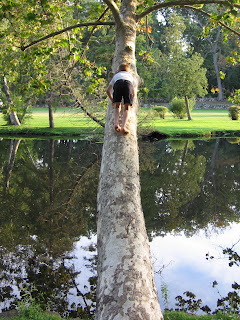 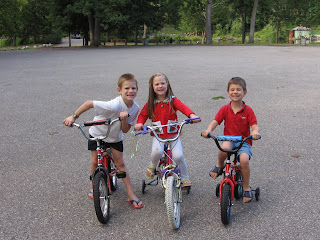 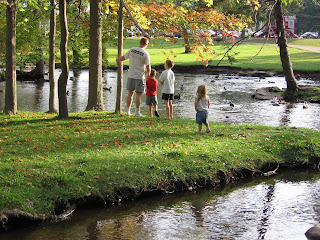 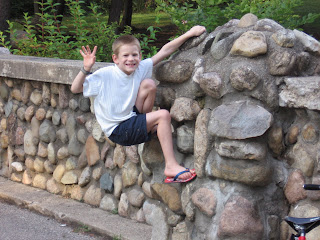 The funny incidents of our day are in the details.

Situation 1:
When Emily needed a spanking for talking back as we were leaving the park. I decided it would be better to spank her when we got home. Well, she outsmarted me. She was the first to rush in the door. Meanwhile I was cleaning feet and carrying in all the various necessities you take with you when you are trying to keep four kids entertained while your spouse and you play tennis. Ten minutes later Alex reminded me that Emily still needed a spanking. What a thoughtful big brother. I proceed upstairs and can't find Emily. She was hiding under her bed with the trundle bed pulled in so I couldn't see her. Clever girl. I did indeed spank her.

Five minutes later she comes downstairs slightly stormy-eyed and asks me to call her Princess Emily. Okay. I can do that. I say, "Princess Emily, I love you." She then tells me with some attitude that princesses don't get spanked. What do you think? Was I entrapped? Inwardly I was dying of laughter.

Situation 2:
As Fritz and Emily work on their letters for school I have been cutting out pictures for them to paste. "B" is for bicycle and so forth. I find it fascinating which pictures they choose. Fritz wants bold, graphic pictures. He is very particular how the cars look and who is riding the bicycle. Emily on the other hand willingly takes Fritz's reject pictures. She will get the cat with ordinary markings and the ankles that Fritz refused. She glues quite contentedly. When I gave Emily the choice of which bathing suit she would like...she choose the boring one. The one piece suit. She didn't choose the cute floral bikini. Does she have a sense of modesty? 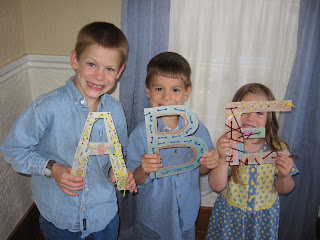 Situation 3:
Fritz is sewing yarn through his cardboard letter "B", he is orderly and precise. He matches the yarn to the crayon color. If there is too much yarn for his pattern Fritz wants it cut off. On the other hand, Emily is messy with her "E". The colors are applied randomly and don't seem to match. Just like her style in dressing. Alex wants to contribute a letter "A". He draws pictures of airplanes, asteroids and angel fish. Instead of viewing his yarn as too long, Alex keeps punching holes in which to thread it. It isn't messy like Emily's, but it isn't meticulous like Fritz's either. It is somewhere in between. They had the same project but went about it in three different ways. I find that fascinating.

Situation 4:
Jane is talking dozens of new words daily. She wants to pray at breakfast. During her prayer, I can hear her say "thank you" several times, "Jesus loves me" and even finish with an "amen". She is so cute. When we read books, she claims all the baby dolls in the pictures are Jane. Today as she was coming down the stairs she was chanting to herself, "Nanny Nanny Boo Boo." Well, Ben had just said the other day that whoever invented that phrase was genius. Jane is making her papa proud. Her mother has no comment.
Posted by Anna at 9:47 AM 4 comments: