My week has been filled with hours of playing Tetris. I'm packing up our over 3,000 volume library and find the process much like a 3-D, book falling from the sky, jigsaw puzzle. How many thin books will equal this fat one to achieve a solid flat surface. It is made more difficult by the fact the boxes are all different dimensions, but beggars can't be choosers. (Truly, I am grateful for the sturdy boxes from the grocery store.) For the casual looker, our house is now stacked with boxes of kiwis and pineapples. If only the weather would cooperate, you would think it is a tropical paradise here.

"Why the packing?" HGTV has made me aware of the decorating shortcomings of my personal love for books. Books make our house look cluttered. Clutter will not sell our house. With the current competition, houses for-sale practically have to come with maid service. Therefore, we are moving non essentials down to Texas at the end of November to cozy up our new home. I'm already feeling lost without shelves of books to peruse. In fact, the most difficult part is choosing what to pack as I've meant to read that or want to reread this. Perhaps the want for books will serve as a magnet and attract me south for the winter. 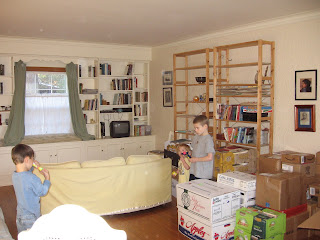 (Photo-in progress. The built-ins properly accessorized will look better. Extra shelves will be disassembled. Furniture will be rearranged. I have a lot of staging to do.)
Posted by Anna at 9:07 AM 4 comments: 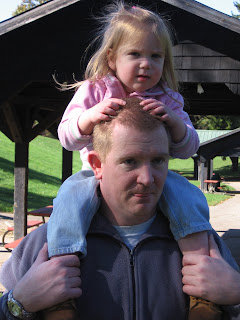 The weight of responsibility on his shoulders. 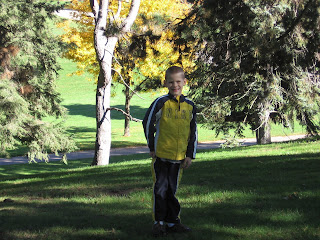 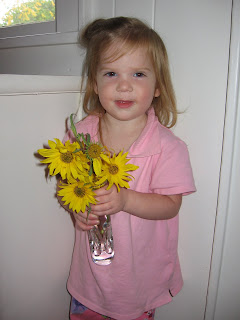 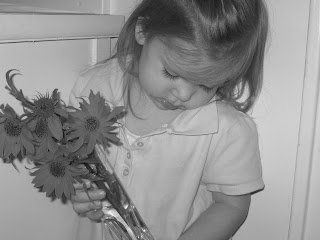 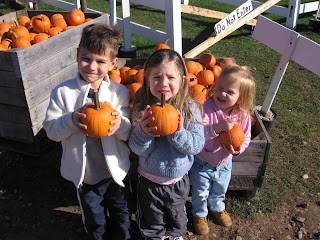 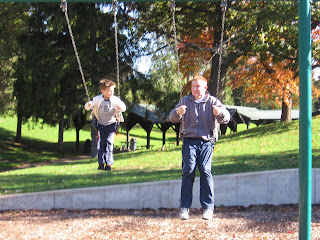 Who can swing higher? 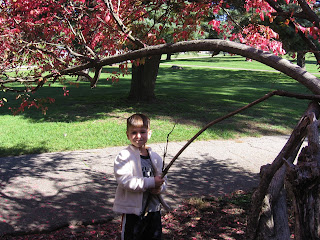 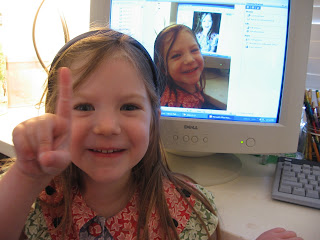 Yes, there is only one Emily. 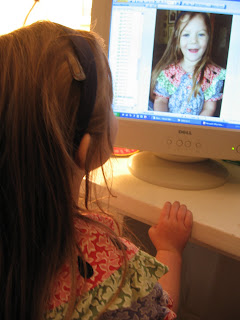 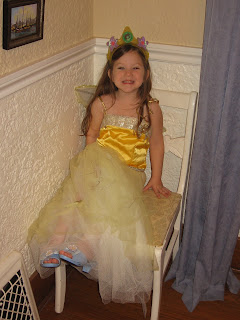 A fairy princess wearing her mother's dress from when she was a little girl. 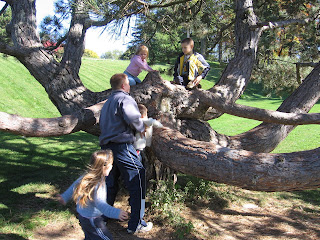 A tree meant for climbing. 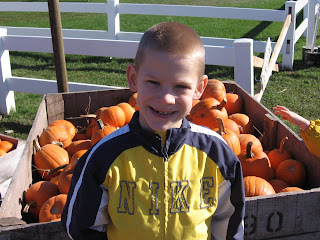 Our much battered and abused diaper bag has retired. After lengthy years with our corporation, she has said "enough with you." (This outburst was prompted by her insider knowledge of a permanent layoff.) Very few office employees regret her sudden departure. She sadly was a reminder of ugly business practices. The visionary leadership will be unable to extend references for its former employee. However, they did comment that the anti-pottytraining union is working on her legal rights.
Posted by Anna at 1:46 PM 2 comments:

A Day of Remembrance 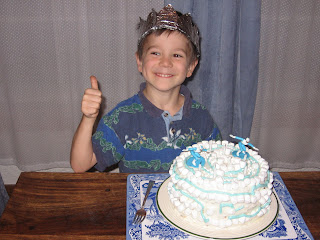 October 9th is a highlight of my year. Six years ago I had a precious brown-eyed baby boy. His puppy dog eyes and sweet disposition endeared him to everyone. Around six months old we began to notice that Fritz had many, many café-au-laits. Ben, being a studious medical student at the time, understood the ramifications of his son’s unusual spots. He had the diagnosis criteria of Neurofibromatosis. I was devastated. Our first son had been a preemie and later had to deal with lead poisoning. Now our second son had a genetic disease. Why us?

“There was a little girl, around 7, in our church who came by herself. She had walked from her home many blocks away and was sitting on the curb an hour before church began. Her name is Misty. In Sunday school I heard someone mention how she has tumors all inside her body and also her brain. They had forgotten the name of her condition. Later in church I sat behind a little girl who looked…to have some physical problems. I realized this had to be Misty. I also noticed she had the same café-au-lait spots that Fritz did. It was then that Ben and I realized she had Neurofibromatosis. It was very difficult to sit through the morning message; I cried almost the whole time. It made the disease so real and so scary. Supposedly this girl has defied her life expectancy due to the severity of her complications. I should have been praising God for her still living, but I think I was selfishly crying over my son. I don’t remember a word the pastor said that day…”

This remarkable incident triggered Ben to set up a time to intercede for our baby boy with the pastor. Later that week a dear believer from our church came over and prayed over Fritz and poured out Scripture to me. My heart which had been in turmoil was flooded with peace. It was one of the most memorable days of my life. The next day our faith-filled pastor and elder came to our home and anointed Fritz with oil and prayed over him. I really believed Fritz was healed. Today I know he was. Years later my definition of healing is slightly different. Then I just wanted him to have no physical and mental problems. Now I know God has a bright future for my son even if he does experience physical suffering. Fritz is a new creation. When he became a Christian his old body became a temporary shell. As I have lived longer and met more Christians with ailments I realize the Man of Sufferings is precious in their lives. I would never wish ugly deformity or pain on my son, but God is merciful and good. And He is powerful. Is anything too hard for him? Jeremiah 32:27


“The following Sunday after our prayer time, the pastor spoke on 1 John 5:13. After the service, he asked me if I had read on to verse 14 and 15…I had, and felt that the words promised that God had answered our prayer. The pastor felt the same. The dear believer, who had also prayed with us, independently came up to me with the exact same verses in reference to Fritz.”

This is the confidence we have in approaching God: that if we ask anything according to his will, he hears us. And if he hears us - whatever we ask - we know that we have what we asked of him. 1 John 5:14-15

My faith journey continues. Some days I fall into sinful worry and forget that my son is in the hands of the Great Physician, the Maker of the Universe, the Gentle Shepherd. When my eyes refocus on Christ I am embarrassed at my lack of faith. Today I am more thankful than ever for my son Fritz. I no longer question “why us?”, but rather count it a privilege to bear testimony of God’s extraordinary work in our lives.

I wish I could share Misty's testimony too, but I don't know it. I have to believe that a child who limped to church without parents will someday be sitting on the lap of her Heavenly Father. When Fritz's birthday arrives I think of her too.
Posted by Anna at 9:33 PM 4 comments: