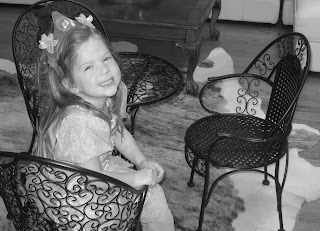 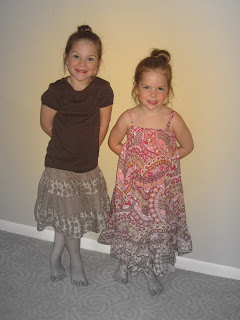 The girls came home from the neighbors wearing mascara and lipstick. She even pencilled their eyebrows. 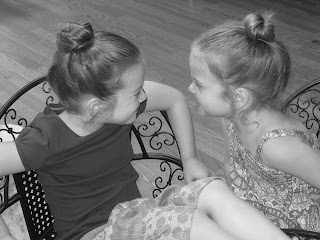 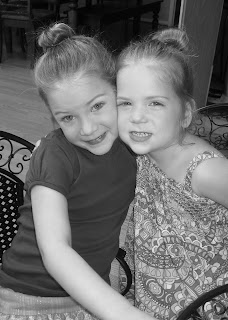 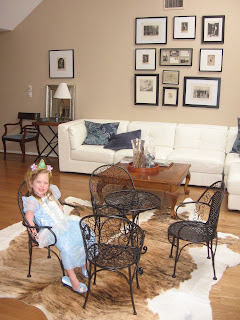 The girls are loving their birthday bistro set. Since they are June babies they unwrapped it a bit early. 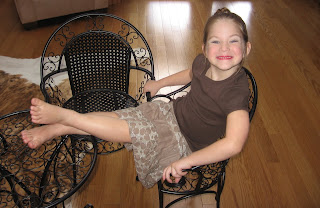 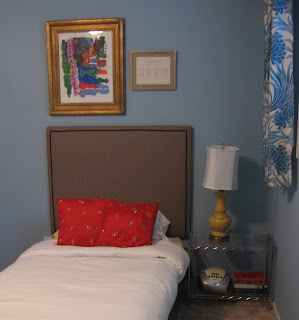 Emily did the painting above Alex's bed. My brother did the ink drawing. 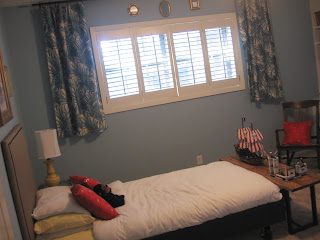 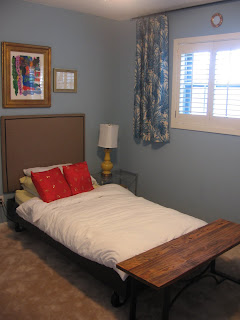 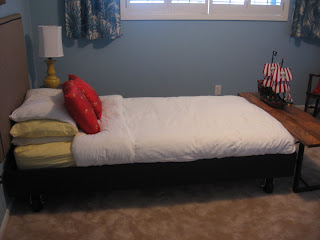 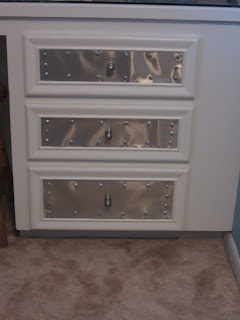 Applied aluminum with piercing screws to the built-ins drawers and cabinet.
Posted by Anna at 4:11 PM 4 comments:

First you need to know that Emily keeps a little box of special rocks under her bed.

Today, I picked up Emily from Sunday school and her teacher told me some surprising and funny news. Unbeknownst to me, Emily put a rock in the offering plate. When her teacher said that the offering is suppose to be money, Emily said, "But it's my favorite rock and I want the church to have it." Well, the teacher appreciated that and said they will have to figure out what to do with the rock. I love the generosity and simple act of my little girl. Though it was only a rock, it was the best thing my five-year-old had to offer to God.
Posted by Anna at 8:08 PM 5 comments:

These are a few of the interesting books we read this year. Many of the books are suggested by Veritas and Sonlight curriculum. One of the greatest things about home schooling is choosing what makes the reading list.

The Benge team writes consistently interesting biographies about people who I would love my children to emulate. This one penned Roland Bingham's perseverance, because many of his fellow missionaries died days after arriving in Africa. Though he suffered discouragement and physically, he continued pushing into Africa's interior because he wanted Christ preached. 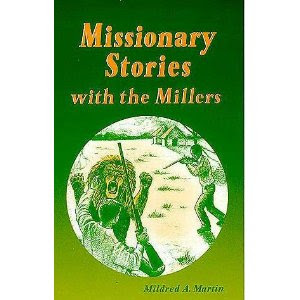 Short little chapters about true events and people. Might stimulate further research into these Christians' lives.

Fritz was a fan of Detectives in Togas. The sequel is also good. (Sorry, you can't look inside it from my page, but Amazon does allow you a sneak peek.)

The Winged Watchman is about a Dutch family who shows bravery in their Nazi occupied village.

Shadow Spinner is a Persian tale about a queen who tells stories nightly to the king to save her life. It reminded me a little of Esther...so beware there are some adult concepts like a harem.

Ancient Rome comes to life in this 17 book series. I read the first four, and Alex took off where I left off. For months he asked for book 17 and he won it as a school prize. He probably finished it the day it arrived.

Amusing tale about 2 pet owls. The author is gifted with a conversational writing style.

One of Alex's favorite authors. He loves this trilogy called the Crown and the Covenant.

"In Scotland in 1666, fourteen-year-old Duncan learns the value of being true to his faith while fighting against supporters of England's King Charles II, who oppress the Covenanters--those who believe that only Jesus can be king of the church."


Dangerous Journey is from my childhood and it is the abridged version of Pilgrim's Progress. Awesome illustrations, prepare to be spiritually challenged by the piercing word pictures.
Posted by Anna at 9:54 PM 1 comment:

Life as we know it

This week we had the opportunity to gently discourage a doctor from coming to practice here. Yes, he would be more competition for B, but we both believe in a free market and if he really wanted to come here then so be it. Our objective was to prevent another orthopod from coming here under false pretenses and then leaving after a year like the last two did. I remember Ben’s interview dinner over 2 years ago at the same seafood and steakhouse restaurant. I had a cough then and I had one this time too. Weird. The service was slow last time due to a kitchen fire. This time it was just slow. In March of 2008 we were told by someone at dinner how much this city was like Kzoo (where he grew up). I loved hearing that since I didn’t want to move from SW Michigan. I thought great. There must be shopping, great parks, affordable housing, awesome thrift stores, no mosquitoes just a 20 degree temperature difference. Strangely enough this week’s interviewee is living in Michigan. I didn’t say that this sleepy Texas town is anything like Michigan. In fact we didn’t gloss over the mosquito problem or the lack of a middle class…how the rich exit the city on the weekend because 5 days in the city are 5 days too many. I can laugh at the hole we live in, because I came here aware that it was just that. We visited here four times before we signed a contract. I knew a majority of the men wear silk shirts and flashy jewelry and the women wear way too much makeup. I didn’t know that the tattoo parlour would be the business in town that grows, but really it isn’t surprising. We are here because of the practice opportunity and because Ben loves to fish. Whether we are here forever, I couldn’t say. But if we are, maybe Ben will start wearing floral shirts untucked and sandals to clinic and I’ll cake on more beauty products and sell them from the trunk of my pink Cadillac. And for our twentieth wedding anniversary we’ll get his and her tattoos. Taking body art suggestions.
Posted by Anna at 6:12 PM 3 comments:

So I was sitting in church this morning feeling a bit blue. I still miss our Michigan church. We are back in the churchgoing south where there is a famine for hearing the word of God and church is focused on programs. We attend a very contemporary church which I struggle with accepting some of its showmanship and smoke machines. And as I thought about the lyrics in the worship time I realized why I find some of it so dissatisfying and depressing. The words were mainly superlatives. That’s great when you are singing about God, but it was superlatives in reference to my behavior. “I will ALWAYS love you and my EVERY heartbeat is yours.” How can that be? I am just human and I know the straying instincts of my heart, why should I sing a promise I won’t keep? I could sing empty words, but that is paramount to lying or delusional self-goodness. I could sing the trite and when I fail, the devil is going to jab his ugly finger in my face and say I told you so. Standing alone on my effort I will be guilt ridden and insecure. Whereas, the devil has no arrows of accusation when it comes to God’s character. God is above reproach. I wish more of the songs were focused on Him not me, because God will ALWAYS love me (even when my heart is divvied up, and my thoughts are elsewhere). I can sing about his love and his kindness, and be refreshed and drawn to thankfulness. I know by now that Christianity has very little to do about me, but EVERYTHING about CHRIST working in me. Yes, it's sobering for a control freak, yet to cast off a me-based theology is ultimately freeing.
Posted by Anna at 4:41 PM 3 comments:

To be so Cute 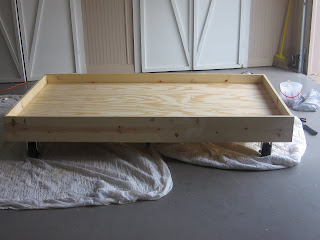 So this is it...unpainted. I used a 1/2 inch plywood for the base, framed it's underside in 2x4s and finished it's exterior with 1x8s. I used 5 inch industrial casters. After some dawdling I started the bed at around 8:30 pm and finished it about midnight. I'm embarassed to say that it took much longer than it should have. A few of my 2x4s were 1/8 off which is a whole lot in carpentry. Lesson learned: Don't precut wood. Cut it as you go instead to account for warps and imperfections. Because I hate doing shoddy work I found this quite frustrating. I used paint sticks as shims. Fortunately I was already planning on painting the bed when I was finished. Therefore, out came my favorite can. Water putty saved the day.
Posted by Anna at 10:24 AM 4 comments:

Been consumed with yard work, tearing down a fence, getting to know neighbors, building a new fence, cutting hair, cutting a hundred finger and toenails, painting a bedroom, staying up all night to do surgery, waking up to cough and cough some more, shopping for wood at Lowes, building a platform bed with huge casters, going to a garage sale next door, finding dishes there, eating lunch, washing those new dishes, upholstering a headboard, more yard work, cleaning leaves out of the pool, taking another trip to Lowes for paint, painting a bed, doing dishes again, putting kids to bed way past their bedtime, going in on Saturday to do surgery, mowing the lawn, and (don't forget) spraying six bodies with mosquito repellent every time you exit the door. I have stiff hands and Ben has a sore foot, but there is nothing quite as satisfying as getting some much needed work done. I love being busy in my home. What a blessing it was for Ben to mow the lawn and the kids to help hammer and paint.
Posted by Anna at 11:04 PM 2 comments:

During the middle of the week we headed out of town a few miles and with old white business shirts flapping and our snow sticks (orange metal rods you use in snowy climates to mark your driveway) and green rubber gloves. We were a sight. All six of us. We picked wild dewberries by the side of the road. After past experience of intense itch from the thorns, our arms were covered and the snow sticks enabled us the push back the thorny vegetation to reach the plumpest berries in the shade. When we came home our shoelaces were purple and our white shirts were splattered with stains. We've been enjoying icecream and berries since. 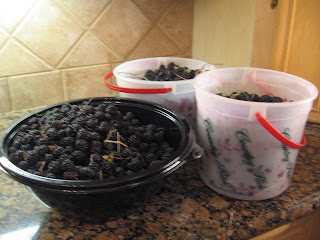 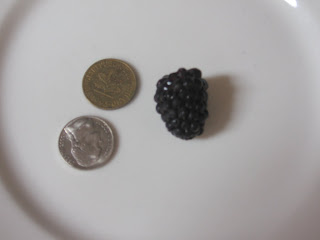 Strangely, I found a German pfenning in my wallet so you can see the size of the dewberry or a nickel for those who prefer.
Posted by Anna at 10:42 PM No comments: